Vikings quarterback Taylor Heinicke is expected to start the season on the non-football injury list after severing a tendon in his left foot, as ESPN.com’s Ben Goessling writes. The Old Dominion product reportedly suffered the injury while trying to help a friend get back into his apartment earlier this month. 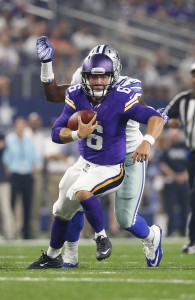 Heinicke, in the process of being a helpful friend, apparently tried to kick open the door like Michael Chiklis on The Shield and gave himself a serious injury. There was no foul play or substance abuse involved in the incident, a source tells Goessling. The Vikings signed Heinicke as a UDFA last year and he managed to make the team as the No. 3 QB after an impressive preseason showing. Heinicke was said to be looking good in practice this year before the unfortunate injury.

With Heinicke potentially out until November, one has to wonder if Minnesota could have extra motivation to pursue free agent QB Nick Foles. Foles, released by the Rams on Wednesday, was quickly linked to the Vikings as well as the Cowboys. Last night, Darren Wolfson of 5 Eyewitness News reported that there were ten teams doing their due diligence on the 27-year-old.