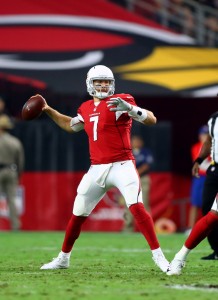 Arians said (via Darren Urban of AZCardinals.com, on Twitter) Gabbert will be the starter and Stanton the backup going forward. Carson Palmer is not expected to return this season.

Stanton suffered a knee sprain that sidelined him and let Gabbert into the lineup the past two weeks, and the former first-round pick led the Cardinals to an upset win over the AFC South-leading Jaguars on Sunday. Gabbert’s thrown for 498 yards and five touchdown passes, while completing 61 percent of his passes, in the two games he’s started.

With Palmer having not committed to a 2018 return, Arians said considering how Gabbert’s playing right now he would feel “very confident” in starting him next season if that came to pass, per Urban (via Twitter).

Stanton counts $4.15MM against Arizona’s cap this season. Gabbert is making less than $1MM. Both players’ contracts expire after this season.