Jeff Fisher is putting the wheels in motion for a return to coaching. The former Rams and Titans head coach has begun “contacting potential staff members,” sources tell Jason La Canfora of CBSSports.com. 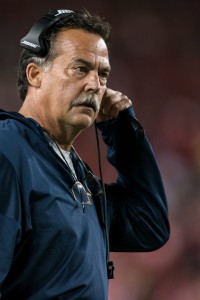 The Rams canned Fisher in the middle of the 2016 season. The relocation to Los Angeles did not give Fisher the clean slate he was hoping for and he’s now eager to salvage his legacy, La Canfora hears.

It remains to be seen whether teams will seriously entertain Fisher. In his nearly five year run with the Rams, Fisher went just 31-45-1 with zero playoff appearances. He had better success with the Titans, though they reached the Super Bowl just once in his 17 years. All in all, Fisher owns a career 173-165-1 regular season record.

The number of potential head coaching vacancies this offseason could give Fisher a puncher’s chance, however. By our count, there could be as many as ten teams looking for a new head coach this offseason, including the Giants. Some in the football world have suggested to La Canfora that the Browns could consider someone like Fisher given their inability to recruit top candidates in the past.