Jon Gruden has not officially committed to leaving the broadcast booth yet, but should he do so and rejoin the Raiders, he may have a name in mind for offensive coordinator. 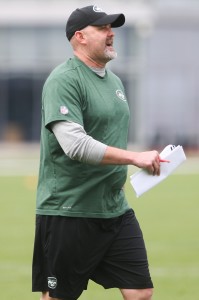 Gruden is interested in bringing Jets OC John Morton with him to Oakland for the OC role, Manish Mehta of the New York Daily News reports. The Jets would not stand in the way if that were to happen, Mehta adds. Morton broke into coaching during Gruden’s Raiders regime.

Mehta notes the 48-year-old Morton considers Gruden, 54, a mentor. Morton has one year of offensive coordinator experience, signing on with the Jets earlier this year after being a wide receivers coach with the 49ers and Saints since 2011. Morton also resided on the Packers’ practice squad briefly during Gruden’s time as a Green Bay assistant in the early 1990s.

This season, Morton helped coax quality play from Josh McCown. The 38-year-old passer set a new career high with 18 touchdown passes. He completed 67 percent of his passes despite working with a young offense, this coming after McCown connected on just 55 percent of his throws with the 2016 Browns. Robby Anderson also enjoyed a breakout year under Morton, recording 941 receiving yards, with Jermaine Kearse also having his most productive season as a pro.

Although the Jets entered Week 17 with the league’s 24th-ranked offense, they were not supposed to be as productive as they were, and Morton may have a believer in Gruden.