A steady run of Texas Longhorns have declared for the 2018 draft, and linebacker Malik Jefferson will be the latest. 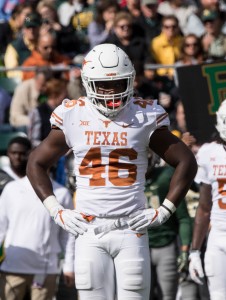 The junior linebacker will forgo his senior season in Austin to place his name in the 2018 prospect pool, he announced via The Players’ Tribune (Twitter link). Jefferson is viewed as a late-first-round-level talent by some mock drafts at this stage of the process.

A former five-star recruit, Jefferson earned Big 12 co-defensive player of the year acclaim after a season that included 110 tackles and four sacks. Although 2017 represented by far Jefferson’s best season, he finished his three-year career with 13.5 sacks and 26 tackles for loss.

One comment on “Texas LB Malik Jefferson To Enter Draft”