Finally, Roger Goodell has his extension. The league’s Compensation Committee has told all owners that a new contract for the commissioner has been executed, a source tells Mike Florio of PFT (Twitter link). It’s a five-year extension, taking Goodell to the start of the 2024 league year (Twitter link via Albert Breer of The MMQB). 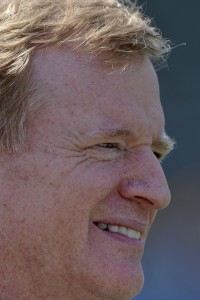 It has been an arduous few months for Goodell. Initially, it seemed that the commissioner’s new contract would be inked in the summertime. However, the anti-Goodell campaign from Cowboys owner Jerry Jones threw a wrench into things. While Jones was not technically a member of the six-man Compensation Committee, he was regarded as an unofficial seventh member. Using his influence, Jones helped to galvanize a small group of owners against a lucrative new contract for Goodell – or, at least, invite new scrutiny into the pact. But, it seems that he lost momentum as time went on. Florio hears that Jones “had four or five other owners on his side, at most.”

In a memo to all 32 owners, the league says that there was a “nearly unanimous consensus” among all owners to finalize the deal. With the support of his fellow committee members, Falcons owner Arthur Blank signed the “binding contract extension” on Wednesday afternoon.

While Jones is presumably unhappy about the extension, he may come away with a separate victory. For a long time, Jones has railed against the high salaries of executives in the league office. Already, buyouts have been offered to senior officials and the NFL may scale back its budget for investigations, such as the one that resulted in Ezekiel Elliott‘s six-game ban.

Goodell’s new deal, which will keep him in place beyond the next round of CBA negotiations, could be worth as much as $200MM.

Here is the complete text of the Compensation Committee to all owners, via PFT:

“In recent days, we have spoken with each of you regarding the status of the negotiations to extend Commissioner Goodell’s employment contract. In the course of those discussions, we have reviewed with you the details of the contract extension. Our Committee unanimously supports the contract and believes that it is fully consistent with “market” compensation and the financial and other parameters outlined to the owners at our May 2017 meeting, as well as in the best interests of ownership. We also have expressed in those conversations our strong belief that we should proceed to sign the agreement now, consistent with the unanimous May resolution and to avoid further controversy surrounding this issue. We are pleased to report that there is a nearly unanimous consensus among the ownership in favor of signing the contract extension now.

Accordingly, this will advise the ownership that a binding contract extension has been signed by the Commissioner and by Arthur Blank, on behalf of the League entities.

We are pleased to have resolved this issue and we appreciate the strong support received from our partners. It was particularly gratifying to hear so many owners commit to being more engaged in league affairs and to express the desire to work more closely with the Commissioner and League staff on matters critical to the League. We know that we speak for all of you, as well as for the Commissioner, in saying that the NFL is strongest when our ownership is active and unified.

We look forward to seeing each of you at the Special Meeting in Dallas on December 13th and to working together, as a partnership, to address the important issues facing the League.”