Mock drafts’ consensus top running back will indeed be making himself eligible for the 2018 draft. Saquon Barkley will skip his final season at Penn State and pursue an NFL career next season. 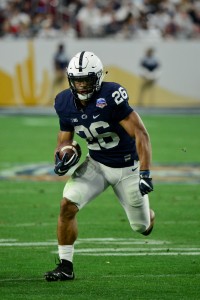 The junior ball-carrier announced his decision on Instagram. He is expected to be selected near the top of the first round and has been rated as the draft’s top talent by some experts.

Barkley posted back-to-back seasons with 20-plus touchdowns. After totaling 1,898 yards from scrimmage and 22 touchdowns as a sophomore, the most dynamic Nittany Lion rampaged for 1,903 and 21 this season. He will be a coveted target for teams picking near the top of the draft. Barkley received fewer carries this season (217 after taking 272 handoffs in 2016) but caught a career-high 54 passes, showcasing a vital component of his skill set.

Coming off a bowl performance featuring 137 rushing yards and two touchdowns, Barkley will be in demand from teams seeking a three-down back. The Browns, Giants and Colts will hold the top three picks, with a second Cleveland pick stationed at No. 4 because of the Texans’ 2017 struggles. Each team would probably upgrade their backfield situation with Barkley, whose draft position could well depend on what Josh Rosen and Sam Darnold decide to do.