Wisconsin linebacker Jack Cichy was eligible for a medical redshirt in 2018. Instead, he’s going pro. 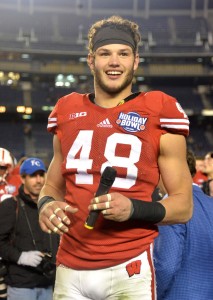 “At the end of the day, whatever comes next for me, I mainly just want to make Wisconsin proud,” Cichy wrote in a piece for The Players’ Tribune. “I want to be the next guy people point to as someone who came to Madison as an unknown, worked his tail off and then became a mainstay in the NFL. I want to be like Jim Leonhard and J.J. and so many other guys who came here with a far-fetched dream and then achieved greatness. I want to uphold that legacy. But mainly, I just want to make all of Wisconsin proud. I’m a Badger for life.”

Cichy suffered an ACL tear in the summer that prevented him from seeing the field. That was tough news for Wisconsin fans to swallow but also a disappointment for the many NFL scouts who had him on the radar. Before the injury, Cichy was viewed as a first-round prospect. If he can demonstrate that he has fully recovered from the tear, he’ll likely garner top-32 consideration once again.

The 6’2″, 223-pound athlete began his collegiate career as a walk-on. The undersized scrapper turned out to be a star for the Badgers and eventually became a team captain. In 2016, he had 60 tackles and seven tackles for a loss before a torn pectoral muscle cost him the second half of the season. Thanks to injuries, Cichy has not seen the field since Oct. 22, 2016.