We have two more draft eligible college prospects announcing their intent to turn pro after we learned highly-touted quarterback Josh Allen would be skipping his senior season and declaring for the draft. 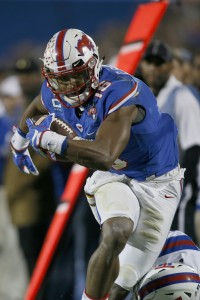 SMU wide receiver Courtland Sutton revealed his decision to forego his final year of eligibility in an Instagram post tonight.

“It has been an incredible run and after discussing things with my family, I have decided to declare for the 2018 NFL Draft.

The relationships I have built, and the experiences I have had are absolutely priceless. My SMU family is full of teammates, coaches, and friends that have been there for me since Day 1! Going to school and playing ball with my brothers is something that I wouldn’t change for the world.
I would like to give a huge thanks to all those who helped me behind the scenes, Coach Stepp, TMFSS, the equipment room, the training room, Ms. Lisa, and all those that work in the Loyd building who have had an impact on my life while at SMU.

I am absolutely humbled by the opportunity that I have ahead of me, and I couldn’t have gotten here without the support and love from my family. My degree from SMU is something I will forever cherish, and I can’t wait to see what God has in store for me next!”

Sutton has been considered one of the draft’s top wideout prospects since the start of the season, and he’ll certainly have a chance to be selected in the first round. The junior receiver stands 6’4”, 216 lbs., having caught 12 touchdowns on 68 receptions for over 1,000 yards in 2017. Sutton is currently ranked as the draft’s second best best wide receiver, according to Matt Miller of Bleacher Report.

Louisville cornerback Jaire Alexander will enter the 2018 NFL Draft as well, according to college football reporter Brett McMurphy (Twitter link). In addition to the announcement, McMurphy also reported that Alexander would be skipping the TaxSlayer Bowl because of his decision to turn pro. Alexander only recorded one interception this season, but is ranked as the seventh best corner on Matt Miller’s most recent draft board.