Draft declaration season is in full swing and we have a top quarterback making his intentions known that he will be turning pro. Wyoming officially announced that their junior starting quarterback, Josh Allen, would be declaring for the 2018 NFL Draft on their Twitter page after the team won the Idaho Potato Bowl this afternoon. 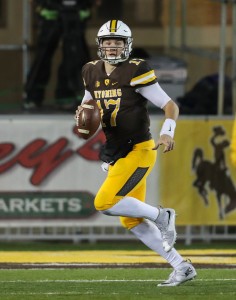 Allen is going out on a high note after he was named MVP of the bowl game having thrown for three touchdowns and no picks in his final collegiate appearance. However, despite coming into this college football season as one of the most highly-regarded draft eligible signal callers available, Allen struggled versus higher quality defenses during out-of-conference play. He found his footing later in the year, but is now generally thought of in a tier behind fellow prospective first round picks, UCLA’s Josh Rosen and USC’s Sam Darnold.

The quarterback is considered a physical freak by many draft analysts, who features a canon arm and is very mobile for his 6’5”, 233 lbs. frame. Allen is very raw and would likely need time on the bench before playing during the regular season, but could still be taken high in the first round given his elite natural ability.

Allen should be just the first of many top college quarterbacks that will officially declare for the draft as bowl season continues to progress.