When Josh McDaniels officially accepts the Colts’ head coaching job (something he’s fully expected to do once the Patriots’ postseason run concludes), he intends to hire Raiders quarterbacks coach Jake Peetz as Indianapolis’ next offensive coordinator, according to Jason La Canfora of CBSSports.com (Twitter link). 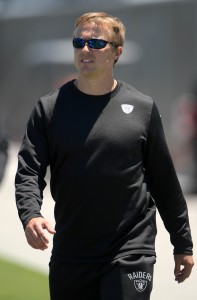 While McDaniels is still in coaching limbo for the time being, his numerous years in the NFL have allowed him to quickly formulate a coaching staff. Peetz isn’t the only presumptive hire that McDaniels has made with an eye towards the Colts job, as Tom Pelissero of NFL.com reported Monday that Indianapolis is also expected to bring in Cowboys linebackers coach Matt Eberflus as the club’s new defensive play-caller.

Peetz, 34, doesn’t figure to run the Colts’ offense, as McDaniels has made his name in the NFL by calling offensive plays. Still, Peetz — who spent only one season as the QBs coach in Oakland — figures to work closely with Indianapolis quarterback Andrew Luck, prepare a weekly gameplan, and help install the Colts’ new offensive scheme.

Peetz has worked his way through the collegiate and NFL ranks in fairly short order, as he was working as a safeties/strength coach as recently as 2006. He was subsequently employed by the Jaguars as both as a scout and an offensive assistant before spending time with the University of Alabama, the Redskins, and — most recently — the Raiders.

2 comments on “Colts Expected To Hire Jake Peetz As OC”