Apart from all the Patriots drama unfolding today, both of their coordinators, Josh McDaniels and Matt Patricia, have completed their scheduled interviews with the Giants. The team announced that they had interviewed Patricia earlier in the day, but McDaniels had finished his conversation with the team this afternoon, according to James Palmer of NFL.com (Twitter link). Palmer adds that the group who interviewed McDaniels consisted of team owner John Mara, general manager Dave Gettleman and assistant general manager Kevin Abrams. 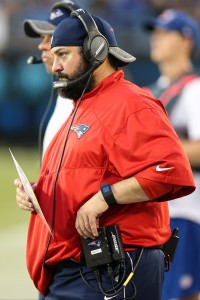 Patricia and McDaniels are now the second and third head coaching candidates to be interviewed by the organization. Current interim head coach Steve Spagnuolo spoke to the Giants about their head coach vacancy on Wednesday. However, it should be noted that McDaniels is the first offensive head coach that has been interviewed in the team’s search. New York hasn’t flat out mentioned that they rather go in a certain direction, but there has been chatter that they want someone who has experience in the head coach role, which McDaniels certainly has from his time in Denver. Although, Patricia does not have head coaching experience and the team clearly still has interest in him, so that may not ultimately be a deciding factor.