The Panthers have hired longtime NFL coach Norv Turner their next offensive coordinator. The news was first reported by David Newton of ESPN.com.

Turner was in Carolina on Wednesday to formally interview for the position and it didn’t take long for the two sides to hammer out an agreement. On Friday, the team made it official. 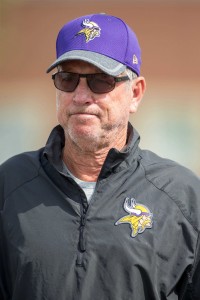 Turner’s hiring should come as no surprise, especially given that he was the first — and only — candidate mentioned following the firing of Mike Shula on Tuesday. Reports indicated the Panthers preferred to hire a veteran coach, and Turner certainly fits that bill. He’s served as a coordinator for six clubs and been a head coach for three more teams. Turner, 65, was most recently the offensive play-caller for the Vikings before abruptly resigning midway through the 2016 campaign.

In addition to his wealth of experience, Turner is also close with Panthers head coach Ron Rivera. Turner hired Rivera as an assistant coach and later defensive coordinator when both worked for the Chargers, and Turner also recommended Rivera for the Carolina job when it became open in 2011.

With the Panthers, Turner will take over a unit that boasts pieces such as quarterback Cam Newton, running back Christian McCaffrey, wide receiver Devin Funchess, and tight end Greg Olsen. Despite those options, Carolina’s offense struggled in 2017, ranking 12th in scoring, 17th in DVOA, and 19th in yards.

Meanwhile, Scott Turner will join his father in heading to Carolina, as he’ll become the Panthers’ new quarterbacks coach. The younger Turner most recently served as QBs coach at the University of Michigan, and has worked with the Panthers, Browns, and Vikings at the NFL level.