The Panthers will be interviewing a pair of general manager candidates this week. According to ESPN.com’s Adam Schefter (via Twitter), the organization will talk to interim general manager Marty Hurney and Texans vice president of player personnel Jimmy Raye III about the full-time gig. 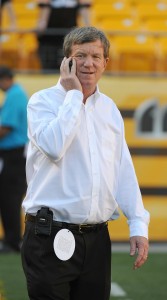 Hurney, who served as the Panthers GM for more than a decade during the early 2000s, reclaimed his former position (on an interim basis) after the organization fired Dave Gettleman last July. The executive was originally supposed to advise through the 2018 NFL draft and assist with finding a new general manager, but plenty has changed in the organization since that time. Following a successful 11-5 campaign, new chief operating officer Tina Becker could simply decide to remove the interim tag from Hurney’s title.

Meanwhile, Raye has moved up the front office ranks in recent years. The 49-year-old served as the Chargers’ director of player personnel from 2008 through 2012, and he moved on to become vice president of football operations with the Colts. In 2017, he served as vice president of player personnel/assistant general manager with the Texans. NFL.com’s Tom Pelissero tweets that the organization is also eyeing Bills executive Lake Dawson and Titans executive Ryan Cowden.

As ESPN’s David Newton writes, the Panthers general manager will certainly have their hands full this offseason. While the team has already extended head coach Ron Rivera, they’ll have to try to lock up a pair of key veterans in defensive end Julius Peppers and left guard Andrew Norwell.