Earlier this week, SI.com’s Albert Breer reported Eagles quarterbacks coach John DeFilippo is set to be a coaching free agent and could be a candidate for an OC job should he not become the Cardinals’ head coach. 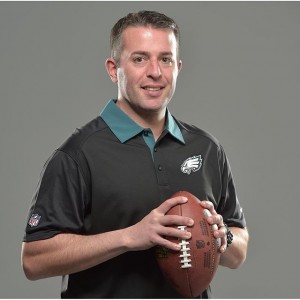 The Seahawks are interested in DeFilippo to succeed Darrell Bevell as OC, Ian Rapoport of NFL.com tweets, adding he will join Brian Schottenheimer as a sought-after interviewee for Seattle — should the Eagles lose to the Falcons today.

The Eagles prevented their QBs coach from speaking with the Jets about their OC job last year, with Pro Football Talk’s Mike Florio reporting Jeffrey Lurie overruled Doug Pederson‘s decision to let DeFilippo do so, but can no longer block him from interviews going forward. Seattle has interest in Schottenheimer but has yet to set up any interviews with candidates. This is the first time in seven years the Seahawks have had an OC vacancy.

DeFilippo played a key role in Carson Wentz rocketing from Division I-FCS product to one-time MVP frontrunner. The Seahawks, who are the first team to have reported interest in the soon-to-be 40-year-old coach as a coordinator, have a franchise quarterback but struggled offensively this season. Seattle had the league’s No. 13-ranked scoring offense this season — its lowest finish since 2010.