Steelers quarterback Ben Roethlisberger has privately told teammates that he wants to play for at least three more seasons, according to Ed Bouchette of the Pittsburgh Post-Gazette. 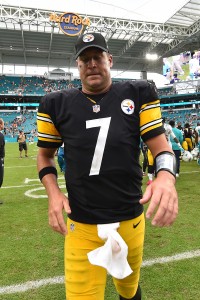 The 35-year-old Roethlisberger indicated following Sunday’s Divisional Round loss that he plans to return for the 2018 season, an important disclosure given that he reportedly mulled retirement prior to the 2017 campaign. Coming off a season which was largely in line with his career norms (64.2% completion rate, 28 touchdowns, 92.4 quarterback rating), Roethlisberger sounds as though he’s eager to continue his career through at least next year, and potentially beyond. He’s under contract through 2019, with cap charges of $23.2MM in each season.

Roethlisberger’s relationship with offensive coordinator Todd Haley has reportedly been the source of some strain, and Ian Rapoport of NFL.com reported Sunday that the rapport between the two Steelers “in in as bad of a place as it’s been in years.” Haley’s contract is now expired, per Bouchette, and it’s unclear if he’ll return to Pittsburgh in 2018 after failing to “build support among key players” on the club’s offense. If Haley leaves the Steelers, quarterbacks coach Randy Fichtner would represent a “strong candidate” to become the team’s next offensive coordinator.

Appearing on his local radio show on CBS Pittsburgh this morning, Roethlisberger seemed to refute any concerns regarding Haley. “There’s always issues in a competitive field,” said Roethlisberger, noting that the reported rift is “perceived as a bigger deal” than reality might warrant (Twitter links via Aditi Kinkhabwala of NFL.com). “You might butt heads at times, it doesn’t mean you have any personal problems.”