It sounds like Jerick McKinnon is ready to move on from the Vikings. On the verge of free agency, running back says he wants to be a team’s top ball carrier in 2018. 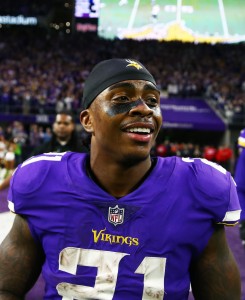 “I want bigger and better things for myself,” McKinnon said (Twitter link via Chris Hine of the Star Tribune). “We’ll see what happens.”

McKinnon was hoping to step into a more prominent role after the departure of Adrian Peterson, but he found himself third on the depth chart this year after the team signed Latavius Murray in free agency and drafted Dalvin Cook in the second round. Although Cook was knocked out of action with a torn ACL in Week 4, McKinnon still spent the bulk of the year as a change-of-pace back behind Murray.

This year, McKinnon demonstrated his value as a pass-catching back, posting a career high 51 catches and 421 receiving yards. In short spurts, he also showed what he can do between the tackles. McKinnon ran for 40 yards off of ten carries against the Eagles in Sunday’s loss, good for an average of 4.0 yards per carry against the league’s best run defense. He also managed 96 yards off of 16 carries in the team’s first game without Cook.

It’s possible that Pat Shurmur could bring McKinnon with him to the Giants. The two have a strong working relationship and the G-Men are in desperate need of a running game overhaul.