Vontae Davis has found a home. The free agent cornerback is signing a one-year deal with the Bills, according to Ben Volin of The Boston Globe (on Twitter). Davis himself has seemingly confirmed the news on his own Twitter account as well. 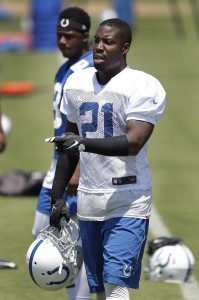 For most of the league’s players, free agency does not kick off until March 14. However, Davis was in a unique position since the Colts released him during the 2017 season. Typically, the available players in February are replacement level types. Davis, meanwhile, was able to shop himself as soon as he received medical clearance from doctors a couple of weeks ago.

No one can accuse Davis of being hasty about his free agent choice. In recent weeks, the veteran met with the 49ers, Browns, Bills, Raiders, and Dolphins before settling on Buffalo. His stated goal was to sign with a team before the start of free agency and he accomplished that with more than two weeks to spare.

The terms of the deal are not yet known and we also don’t know exactly what caliber of player the Bills are getting in the 29-year-old (30 in May). The former first-round pick looked the part of a high-end starter as he earned Pro Bowl nods in 2014 and 2015. However, his performance declined in 2016 and a core injury slowed him down tremendously last season, leading to his November release.

In 2014, Davis earned a stellar 95.1 overall score from Pro Football Focus. In the following year, he turned in a strong 81.9 mark, which still painted him as an above-average starter. However, he was one of the ten worst qualified corners in the league in 2016, per PFF, and wasn’t ranked much better at the time of his release in ’17.

If healthy, Davis could prove to be a valuable depth piece for Buffalo. He could be asked to provide even more if the team is unable to re-sign pending free agent E.J. Gaines.