This is shaping up to be a busy week for running back Chris Ivory. The free agent is visiting with the Browns on Tuesday, according to Ian Rapoport of NFL.com (on Twitter). 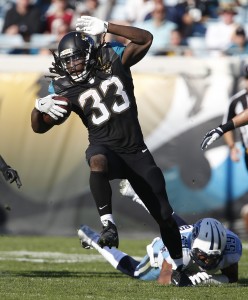 News of Ivory’s trip to Cleveland comes on the heels of word that he met with the Bills on Monday. He plans to take a “few visits,” so it sounds like he’ll explore his options fully before signing anywhere.

The Browns don’t have many noteworthy free agents this year, but running back Isaiah Crowell is among them. After two down years in Jacksonville, Ivory wouldn’t exactly be a great one-for-one replacement for Crowell, but the cash-flush Browns may see the veteran as a solid reserve.

From the sound of it, teams are eager to speak with Ivory even though he is not among this year’s top tailbacks. Dion Lewis, Carlos Hyde, Crowell, and Jerick McKinnon figure to draw some of the highest offers in this year’s free agent RB crop. Other running backs near the top include Rex Burkhead, Doug Martin, Alfred Morris, Jeremy Hill, LeGarrette Blount, and Orleans Darkwa.