While the Chargers are open to re-signing kicker Nick Novak, they intend to let him hit the free agent market first, according to Jason La Canfora of CBSSports.com (Twitter link). 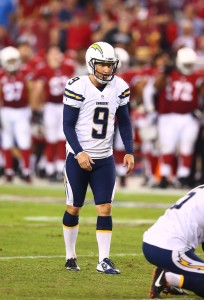 As I wrote earlier this month when assessing Los Angeles’ top offseason needs, the Chargers desperately need to upgrade their special teams unit in 2018. LA ranked 31st in special teams DVOA a season ago, and was (by far) the worst kicking team in the league. Not only did the Chargers give up 22.2 points through their paltry field goal/extra point attempts, but the club’s first two losses of the season were direct results of poor kicking efforts.

Unfortunately for the Chargers, what looked to be a robust kicker market has already begun thinning this week. The Titans inked Ryan Succop to a five-year extension, the Colts agreed to a one-year deal with Adam Vinatieri, the Panthers are reportedly considering deploying the franchise tag on Graham Gano, and the Falcons have opened contract talks with Matt Bryant. Other kickers set to hit free agency include Sebastian Janikowski, Kai Forbath, Nick Folk, Blair Walsh, Chandler Catanzaro, and Dustin Hopkins.

Novak, for his part, has enjoyed two separate stints with the Chargers: he first kicked for the club from 20111-14 before reuniting for a nine-game stretch in 2017. One of four kickers to appear in a game for Los Angeles last season, Novak converted only 9-of-13 field goal attempts and also missed an extra point.