The Titans have signed Ryan Succop to an extension. Succop was scheduled to reach unrestricted free agency in March. Instead, he’s now under contract with the team for the next five years, a source tells ESPN.com’s Cameron Wolfe (on Twitter). The deal is worth $20MM in total with $7.25MM guaranteed at signing. He’s slated to earn $8.25MM over the first two years, which signifies a healthy cash flow. 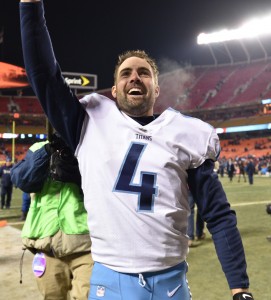 According to Over The Cap, Stephen Gostkowski of the Patriots has the league’s most lucrative contract in terms of average annual value at $4.3MM. With an AAV of $4MM, Succop slots in as the fourth-highest paid kicker in the league, behind only Gostkowski, Justin Tucker of the Ravens ($4.2MM/year), and Mason Crosby of the Packers ($4.025MM). Succop’s total guarantee of $7.25MM trails Gostkowski ($10.1MM) and Tucker ($10.8MM), but puts him ahead of all other NFL kickers.

Succop, 32 in September, connection on 83.3% of his field goal tries in 2017. He also set an NFL record with 56 consecutive made field goals from inside the 50-yard line and edged out Al Del Greco for the team’s single-season scoring record (136 points).

Although Succop hit those milestones, it wasn’t a perfect year for him from start to finish. His field goal percentage was his lowest since 2013 and he missed two extra points. Succop will work to get back to his usual self this year – he made 88.7% of his FG tries from 2014-2016 in Tennnessee and 96% of his extra point attempts.

In other Titans news, Ian Rapoport of NFL.com recently speculated that the team could part ways with DeMarco Murray this offseason. Murray is a potential cap casualty thanks to his $6.75MM charge and the presence of Derrick Henry.