The Colts and Adam Vinatieri have officially agreed to a one-year deal, according to ESPN’s Adam Schefter (on Twitter), setting up an opportunity for the veteran kicker to break the NFL’s all-time scoring record.

Ian Rapoport of NFL.com reported Wednesday that Vinatieri would be returning for his 23rd season and that he was nearing a deal to re-sign with the Colts. 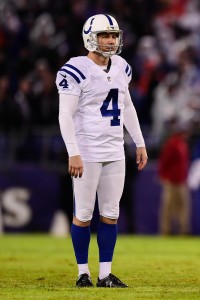 Vinatieri currently owns the second-most points in NFL history with 2,487 and is second all-time with 559 field goals made. Hall of Famer Morten Andersen is the league’s all-time leader in points at 2,544 and field goals made with 565. Vinatieri, 45, hit 29 of 34 field goals last season, with a long of 54 yards. His 85.3% accuracy rate placed him at No. 13 in the league and was his worst since 2013, the season before he connected on a career-best 96.8% of his field goals. He’s also converted 12 field goals from over 50 yards between the last two seasons.