The Colts’ head coaching search is on. Again. This time, the Colts are expected to start by requesting permission to speak with Eagles offensive coordinator Frank Reich and Saints assistant head coach Dan Campbell, sources tell Adam Schefter of ESPN.com (on Twitter). 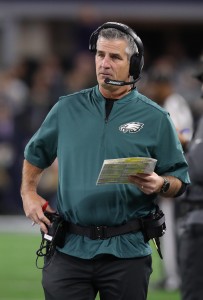 Reich was a hot name at the beginning of this year’s coaching cycle which makes sense considering how effective the Eagles’ offense was in 2017. However, over time, quarterbacks coach John DeFilippo wound up garnering more attention from teams with HC vacancies for his role in Carson Wentz‘s development. His candidacy may also have been hurt by the fact that Doug Pederson is the play caller in Philadelphia.

Last season, the Philly offense ranked third in scoring, seventh in yards, and eighth in DVOA. The 56-year-old has worked as an NFL coach since 2008 and is perhaps best known for leading the Bills offense back from a 32-point deficit in a 1993 playoff game, After spending time with the Colts and Cardinals, Reich was the Chargers’ offensive coordinator from 2014-15 before joining the Eagles the following year.

The 41-year-old Campbell has served only as a tight ends coach or an interim head coach in his seven-year tenure as a full-time NFL assistant. Still, he was one of 12 head coaching candidates recommended by the NFL’s Career Development Advisory Panel late last year and he was a candidate for the Vikings’ OC opening. The Dolphins also interviewed him in early 2016 for their HC job before settling on Adam Gase.