The Cowboys are not planning to let Demarcus Lawrence test free agency after his breakout season. 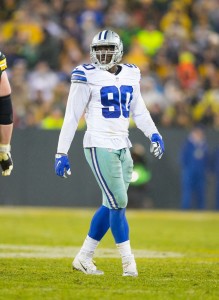 They will not place the franchise tag on the fifth-year defensive end on Tuesday — the first day teams can do so — but do plan to by March 6 (the last day this option is on the table for teams), David Moore of the Dallas Morning News reports (on Twitter). Cowboys EVP Stephen Jones confirmed Dallas will deploy the tender if necessary, per Todd Archer of ESPN.com.

The sides will then begin negotiations toward a long-term deal and have until July 16 to do so. This will take one of the top UFAs off the market. A defensive end tag will cost the Cowboys $17.5MM. Without Lawrence on their 2018 books, the Cowboys are projected to enter the ’18 league year with $19.1MM in cap space. They will have to do a bit of work to create more in order to be a player in free agency.

Lawrence was not expected to head there after his Pro Bowl campaign. The Cowboys were set to begin negotiations this month with their former second-round pick and have established retaining him as their top offseason priority.

After an inconsistent first three seasons featuring injuries and a suspension, Lawrence dominated in his contract year by registering 14.5 sacks. He picked up 7.5 in the Cowboys’ first three games and collected at least one sack in each of Dallas’ first seven contests, doing so for a team that’s been in search of edge help since cutting DeMarcus Ware after the 2013 season. Dallas essentially drafted Lawrence to replace Ware and now intends to pay him in hopes of the sides establishing a long-term Cowboys partnership like the franchise had with Ware.