When the Dolphins slapped Jarvis Landry with the franchise tag earlier this evening, it was assumed that the wideout would remain with the organization through at least the 2018 season. However, Mike Florio of ProFootballTalk.com says the receiver could be shipped out in a trade as early as this offseason. 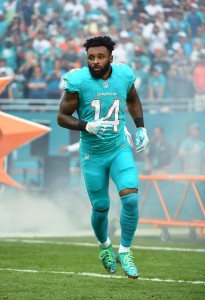 A league source told Florio that the “quick tag” can be attributed to the team’s desire to trade Landry. A deal couldn’t be completed until Landry signs his tender, and Florio believes a trade would be unlikely unless the wideout agrees to a long-term contract with his new squad. Either way, a trade wouldn’t be completely unexpected, as there were whispers that the Dolphins were shopping Landry prior to last season’s trade deadline.

After the two sides failed to make any progress following months of negotiations, the Dolphins surprisingly franchised Landry earlier this evening. The one-year tender is estimated to be worth approximately $16.23MM, which should satisfy the wideout for the time being. Landry’s camp was previously seeking $30MM in guaranteed money and an average salary of $14MM, a pair of numbers that would rank in the top-five among receivers.

As our own Zach Links noted earlier tonight, league rules indicate that the Dolphins have until July 16 to agree on a long-term contract with Landry. If there is no compromise, Landry will play under the one-year deal, and the two sides cannot resume negotiations until after the season.

After two straight 1,000-yard campaigns, Landry finished the 2017 season with 987 receiving yards. The 25-year-old did compile a league-leading 112 receptions and a career-high nine receiving touchdowns, earning him his third-straight Pro Bowl nod.