The Eagles are expected to receive trade interest in quarterback Nick Foles this offseason, and they’re open to dealing their backup signal-caller for the right price, according to Ian Rapoport of NFL.com (video link). 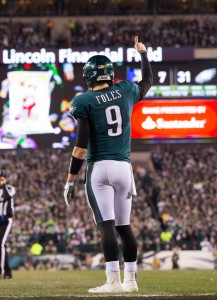 Following Carson Wentz‘s ACL tear, Foles led Philadelphia to a 2-1 record during the final three games of the regular season, and posted five touchdowns against two interceptions during that time. The 29-year-old Foles further stepped up his performance during the Eagles’ first two postseason contests, as he’s managed a 77.8% completion rate, three touchdowns, and no picks.

Although the 2018 quarterback market boasts several competent alternatives, Foles would offer a cheap stop-gap option. While he’s technically signed through 2021, the 2019-21 campaigns are void years. An acquiring club would be picking up Foles for only one season (barring an extension), during which he’d earn a $4MM base salary ($3MM of which is fully guaranteed) and a $3MM roster bonus. The Eagles would take on the remaining signing bonus proration of Foles’ contract, which amounts to $2.4MM.

It’s unclear what kind of return Philadelphia could hope to reap in exchange for Foles. While he’s been successful over the past month or so, Foles’ career track record is consistent with that of an average-to-below-average quarterback. Just last offseason, Foles hit the open market and was only able to land a backup job. The Eagles and general manager Howie Roseman, for their part, have been extremely active in the trade market over the past few years, and have expressed an openness for deals that include either draft picks or other established players.

The key benefit for Philadelphia in a Foles trade would be removing his salary cap charge from its 2018 books. At present, the Eagles are a projected $9.5MM over the cap next season, so clearing $5.2MM by trading Foles would be the club’s first step towards getting right with the cap.