Le’Veon Bell sounds confident that he will remain in Pittsburgh. The impending free agent sat down with NFL Network’s Super Bowl LIVE yesterday and discussed his contract situation. Notably, Bell told the hosts that he believes his contract is a priority for the organization, and he noted that the two sides are closer to a deal than last year. 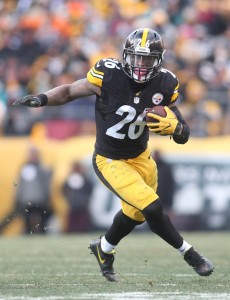 “Yeah, a lot of it is about the guarantees,” he said (via Kevin Patra NFL.com). “That’s what a long-term deal really is, you know? You want that security. That’s why I said I’ll play on the tag. All that’s going to be guaranteed. You want to tag me again, OK, all that’s going to be guaranteed. That’s how I kind of look at it because I don’t want sign a long-term deal and everybody says I signed for $70 million but only the first year is guaranteed. So the first $17 million that you make in that year that’s the only year that’s guaranteed…”

Specifically, Bell said he’d “absolutely” accept a contract that included $50MM in guaranteed money, but he didn’t commit when asked about $30MM. As Patra points out, Bell previously turned down an offer that would have guaranteed him $30MM through the first two seasons of the contract.

The Steelers could slap Bell with another franchise tag, which would pay him $14.5MM next season. Bell sat out training camp and preseason this past season after being tagged, but he noted that he’s not planning on another holdout.

The 25-year-old had another productive season in 2017. He ultimately compiled 1,291 rushing yards and nine touchdowns on a career-high 321 carries. He also added another 85 receptions for 655 yards and two scores.