An arbitrator has ruled against the Packers in their effort to recoup a portion of Martellus Bennett‘s $6.3MM signing bonus, Mike Florio of PFT tweets. Because the Packers waived Bennett and his contract was assumed by another team (the Patriots), the arbitrator deemed that Green Bay is unable to recover the money given to the tight end at the time of signing. 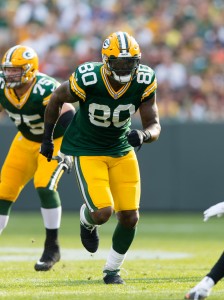 The Packers, with the support of the league office, argued that Bennett should refund his signing bonus because he had not disclosed a pre-existing shoulder injury to the team last year. Even Bennett did keep his rotator cuff tear under wraps, the Packers did not have a clear path to get their money back after the Pats assumed his deal.

Meanwhile, it remains to be seen what the Patriots will do with the contract that they hold with Bennett. The veteran only played in two games for the Patriots before landing on IR, but he is reportedly intent on playing in 2018. His contract calls for a $6.2MM cap hit this year and the Patriots must pay him a $2MM roster bonus if he’s still on the team on March 14.