The Browns’ busy day isn’t showing any signs of slowing down. After pulling off a deal for Dolphins wide receiver Jarvis Landry, the team has now struck another blockbuster deal by acquiring Bills quarterback Tyrod Taylor for a third-round draft pick (No. 65), ESPN’s Adam Schefter tweets. 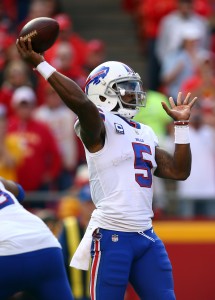 With the move, the Browns locked in their veteran quarterback for the 2018 season while maintaining all their first- and second-round selections and without spending big money on a veteran like Case Keenum or A.J. McCarron. The Bills now are in the market for a quarterback and could potentially package the third-round pick it just picked up in an effort to move up to grab one of the top signal-callers in the upcoming draft.

In his third season as the starter in Buffalo, Taylor continued to limit turnovers while being able to make plays down the field and with his legs. He threw for 14 touchdowns with only four interceptions and added 427 yards and four touchdowns on the ground. In Cleveland, Taylor will be outfitted with his most impressive receiver corps in his stint as a starter with Landry, Josh Gordon and Corey Coleman out wide.

The acquisition of Taylor presumably gives the Browns a stopgap under center, allowing the team to use one its first-round picks (No. 1 and 4) to tab a quarterback in the upcoming draft. Taylor is signed through the 2018 season at a cap number of $18 MM — $10 MM of which is guaranteed.

The move of Taylor away from Buffalo shouldn’t come as a shock. The team had refused to commit to the Virginia Tech product and it was reported in February the quarterback refused to take a pay cut after taking one the year before. Due a $6 MM roster bonus at the beginning of the new league year, it only made sense for the Bills to move on.

If the Bills do not attempt to package picks to move up in the draft, the team will enter the 2018 campaign with Nathan Peterman as its starter, barring any m0ves in free agency.