While previous reports indicated that free agent cornerback Delvin Breaux was close to a deal with the Broncos, he’s now leaving Denver without a deal, per Mike Klis of 9News (Twitter link), who adds Breaux appears set to visit other clubs. 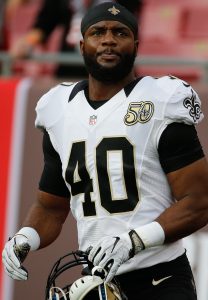 The 28-year-old wasn’t tendered by the Saints earlier this week, making him an unrestricted free agent. Breaux had his highs and lows while in New Orleans: he was a standout in 2015, grading out as a high-end starter per Pro Football Focus’ metrics, but didn’t deliver an encore performance in 2016, and his 2017 season was lost to injury.

The Saints designated Breaux to return from IR in October, but the cornerback had a setback that kept him out for another month. Ultimately, New Orleans did not activate him within the window, meaning that his season was done.

The former CFL player’s standout 2015 campaign saw him compile 45 tackles, 19 passes defended, and three interceptions. Injuries have been an issue with Breaux, who has broken his fibula twice and missed time with a shoulder injury.

One comment on “Delvin Breaux Leaves Broncos With No Deal”