James Harrison doesn’t appear to be in a rush to sign anywhere, barring an aggressive pitch from a team, according to Jeff Howe of The Boston Herald (on Twitter). He adds that the Patriots have expressed interest in a reunion, but it’s not clear to what degree. 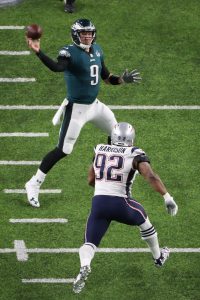 Of course, Harrison may not have much of a choice in not landing an immediate contract. While Harrison was productive after being signed by the Patriots, there may not be a healthy market for a near-40-year-old edge defender with a recent history of locker room problems.

Harrison was released by the Steelers last December after his defensive role was greatly reduced. New England picked him up relatively quickly, and the veteran pass rusher went on to post two sacks with the Patriots during the regular season before performing well in the playoffs.

3 comments on “Patriots’ James Harrison In No Rush To Sign”