The Patriots are re-signing linebacker Marquis Flowers, as Adam Schefter of ESPN.com tweets. It’s a one-year deal worth up to $2.55MM. 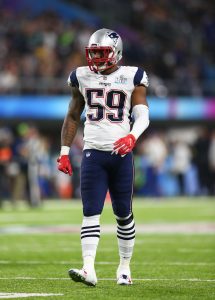 The Patriots acquired Flowers just prior to last year’s 53-man deadline. The linebacker was not going to make the Bengals’ final cut, so Cincinnati shipped him to New England in exchange for a conditional seventh-rounder.

Flowers mostly played special teams for the Bengals in 2016, but he saw time on 361 snaps for the Patriots in 2017. Flowers finished out the regular season with 30 tackles and 3.5 sacks and even started in two games. In the playoffs, he added another six tackles and one sack.

The Patriots lost several key free agents this offseason, but they have largely kept their special teams unit in tact with new deals for Matt Slater, Nate Ebner, Brandon Bolden, Brandon King, and Flowers. Johnson Bademosi left to sign a deal with the Texans, but he has been replaced by Cordarrelle Patterson.