Raiders To Meet With Eric Decker

On Tuesday morning, there were rumblings online of Eric Decker meeting with the Saints. It turns out that Decker is meeting with a team today, but not that one. He’ll be meeting with the Raiders, according to Vic Tafur of The Athletic (on Twitter). 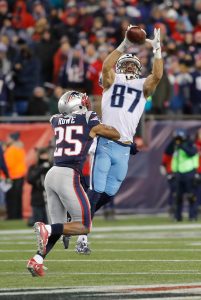 The meeting with the Raiders marks his first visit of free agency. In Oakland, Decker could become the No. 3 wide receiver on a depth chart that already includes Amari Cooper and Jordy Nelson.

10 comments on “Raiders To Meet With Eric Decker”