Free agent cornerback Sam Shields will meet with the Rams on Tuesday, according to Michael Cohen of the Milwaukee Journal Sentinel. Shields is also planning on visiting with the Browns in the near future, but his meeting with Los Angeles will occur first, per Cohen. 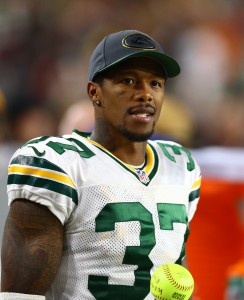 Shields, now 30 years old, suffered the fifth concussion of his career in Green Bay’s 2016 season opener and hasn’t played since. He spent the rest of that 2016 campaign on injured reserve, and the Packers subsequently released him once the season concluded. Shields never drew any interest during the 2017 free agent period, but he’s now back to working on practice fields with the intent of playing in 2018.

It’s unclear if any team will take a chance on Shields, especially given the NFL’s continued focus on head injuries. Shields is confident he will be signed this spring, while at least one personnel executive recently told Cohen that Shields could land a deal if his health checks out. For what it’s worth, Shields says he will end his playing career if he suffers even one more concussion, reports Nate Ulrich of the Akron Beacon Journal.

Shields, who served as Green Bay’s No. 1 corner for a three-year stretch, agreed to forgo free agency in 2014 by agreeing to a four-year, $39MM deal. A former undrafted free agent, Shields spent seven years with the Packers, starting 62 games and racking up 18 interceptions during that span. He earned a Pro Bowl nod in 2014.

The Rams, for their part, have already acquired a new shutdown defensive back, as their trade for ex-Chiefs cornerback Marcus Peters will become official when the new league year begins on March 14. Trumaine Johnson remains unlikely to re-sign with Los Angeles, and Nickell Robey-Coleman is a pending free agent, leaving the Rams with Kayvon Webster, Troy Hill, and Blake Countess, among others, behind Peters.