The safety market has moved at a snail’s pace this year and Tre Boston has taken notice. The Chargers free agent says that he is frustrated by the way things unfolded, though tells Alex Marvez of The Sporting News that he has drawn interest from the Cardinals, Raiders, Browns, and Giants this offseason. Meanwhile, things have stalled with the Bolts because they are looking to pay him more as a “strong safety type of player.” 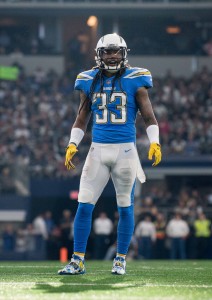 “It’s kind of unbelievable to me,” he said. “We’re talking about a position that’s needed more and more on the field in today’s game. “There are about five or six valuable starting safeties in free agency right now. But I guess it’s just trying to get us to take peanuts like the rest of them have. That’s just the business of the game.”

Signing a player like Boston could impact a team’s compensatory pick formula and clubs with safety needs could be waiting until the draft to score top prospects like Alabama’s Minkah Fitzpatrick, Florida State’s Derwin James, or Stanford’s Justin Reid. The Seahawks are also open to trading Earl Thomas (for a hefty asking price) and that’s probably holding things up for this year’s available veteran safeties. Boston isn’t the only one in a holding pattern – Eric Reid and Kenny Vaccaro are also without NFL homes as we look ahead to April.

“It’s a marginal group,” one executive said of this year’s free agent safety class, noting the lack of top-end speed in the bunch. “You really don’t have one cover safety in the group. You have some decent box types like Vaccaro and Reid, but it’s primarily backup types left.”

Last year, Boston had to settle for a one-year deal. For now, he’s still holding out hope of landing a multi-year pact, but he acknowledges that he may have to do another one-year contract before trying his luck in the open market next year.