Browns To Take Allen Or Mayfield?

For weeks, we have been hearing that the Browns will select either USC quarterback Sam Darnold or Wyoming QB Josh Allen with the top pick. Then, this week, it was reported that Oklahoma signal caller Baker Mayfield is also in the mix. Now, sources say the Browns appear to be down to either Allen or Mayfield as team executives have cooled on Darnold, Mary Kay Cabot of Cleveland.com writes. 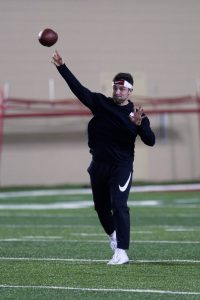 Much has been made about Mayfield’s lack of height, but GM John Dorsey has made it clear that he is not concerned. Dorsey has also indicated that he would not rule out Mayfield over his red flags, which include a public intoxication arrest, grabbing his crotch against Kansas, and planting a flag on the Block O at Ohio State.

“Every young man will make a mistake in his life, I bet you,” he said. “And I think he’s very remorseful of that mistake and I think he’s moved forward from that, and he’s trying to make himself a better person, going through the process.”

Allen, meanwhile, has been praised for his arm strength, but his low completion rate in college underscores his lack of accuracy. If the Browns believe that they can harness his raw skills, then he could be a real consideration for the top choice. However, some would argue that he has the most bust potential of this year’s top four quarterback prospects.

Have the Browns truly drifted away from Darnold? At this point, it is impossible to tell whether the Browns are actually deciding between Mayfield and Allen or if they are simply working to try and drum up a better trade offer. Still, it’s a situation worth monitoring as whispers about Darnold’s lack of polish continue to circulate.

27 comments on “Browns To Take Allen Or Mayfield?”