The Jets have a new tight end. On Monday, the Jets were awarded Clive Walford off waivers, Adam Schefter of ESPN.com tweets. 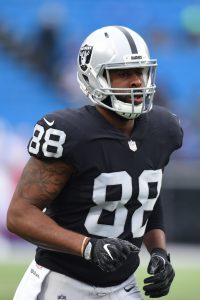 Walford, 27 in October, was released by the Raiders late last week. Walford had some involvement in the Raiders’ offense over the first two seasons of his career, but he was hardly a factor last year thanks to the addition of Jared Cook. Walford averaged 30 catches for 344 yards and three touchdowns between 2015 and ’16. Then, last year, he had just nine catches for 80 yards and no scores.

The good news is that Walford could have a chance to shine in New York. The Jets allowed Austin Seferian-Jenkins to leave in free agency, so he projects as the team’s top tight end over Eric Tomlinson and Jordan Leggett. The Jets could still strengthen that area in the draft, but they may be hard-pressed to find a better option than Walford since their No. 3 overall pick will be used on a quarterback and they don’t pick again until the third round (No. 72 overall).

Thanks to their 5-11 finish last season, the Jets have the sixth-highest waiver priority in the NFL this offseason. Only the Browns, Giants, Colts, Texans, and Broncos could have prevented the Jets from landing Walford.