The Packers may be on the verge of re-signing cornerback Davon House. Tom Silverstein of the Journal Sentinel (on Twitter) hears that House has agreed to a new one-year deal. Meanwhile, House tells Rob Demovsky of ESPN.com (on Twitter) that that he has a visit scheduled with the Packers for Friday, provided that he can make it in time from his home in Hawaii. He expects to re-sign, but says that no deal is done just yet.

Demovsky reported later a deal to keep House in Green Bay is expected to be finalized soon. The only thing that’s holding this deal up is House passing a physical on his visit, Demovsky reports. 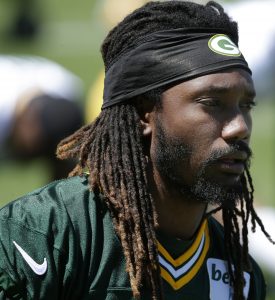 House started in all 12 of his games last year but missed time due to an injury early in the year and a late-season transverse process fracture in his back. He recorded 44 total tackles, six passes defensed, one interception, and one sack on the year, but he struggled in coverage. For the second straight year, he earned a poor grade from Pro Football Focus.

This offseason, the Packers added Tramon Williams in free agency, so House won’t necessarily be in line for a starting role if he returns.

One comment on “Packers To Re-Sign CB Davon House”