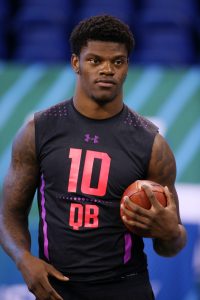 The Patriots may or may not be within range to select Jackson at No. 23 overall. The draft’s top four QBs – Sam Darnold, Josh Rosen, Josh Allen, and Baker Mayfield – are widely projected to come off of the board in the top 10, but the Dolphins (No. 11), Bills (Nos. 12 and 22), Cardinals (No. 15), Ravens (No. 16), and Chargers (No. 17) all have varying degrees of interest in signal callers. If the Patriots are truly sold on Jackson, they may have to move up in the order. In theory, the Pats could package the No. 23 and No. 31 picks to advance in the first round, but that would be a gutsy move to make with more pressing needs to fill elsewhere.

The Patriots have not selected a quarterback in the first round since Drew Bledsoe in 1993, but they need to address the future of the position with Tom Brady‘s 41st birthday coming up in August. The Patriots are either gung-ho about Jackson as his heir or they are actively seeking to give other teams a false impression in advance of the draft.