Reggie McKenzie has long said he is targeting this offseason for a Khalil Mack extension, and that deal is expected to ensure the top Raiders talent is the NFL’s highest-paid defender. But this process has evidently encountered some turbulence. 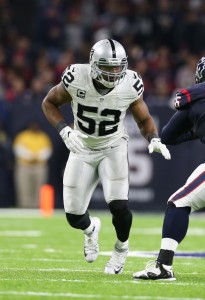 Mack did not show for the first day of Jon Gruden‘s offseason program Monday, Ian Rapoport of NFL.com reports (on Twitter). This is out of the ordinary for Mack, who is going into his final year of his rookie contract (via the fifth-year option). And this might be contract-related.

The Raiders and Mack were discussing an extension, Michael Gehlken of the Las Vegas Review-Journal tweets, adding the team was hoping to get this done quickly. But Gehlken reports the sides are not close on a deal. The Raiders made an offer in February, but that apparently was not a satisfactory proposal for Mack’s camp — now headed by the same agent, Joel Segal, who oversaw Trumaine Johnson playing two seasons on franchise tags.

Oakland finished up crucial contracts for Derek Carr and Gabe Jackson last offseason but, like every other team with a 2014 first-round pick who was in line for a new deal, pushed a Mack re-up to the back-burner because of the fifth-year option. Other than Mike Evans, none of the 2014 first-rounders have signed extensions yet. Mack is one of several star players among that contingent and, in a year when the cap has settled at $177MM, would be in line to not only surpass Von Miller‘s $19MM-AAV agreement (finalized in a $155MM cap year) but become the NFL’s first $20MM-per-year defender.

Since it’s just Day 1 of the offseason program, this is not considered a holdout. But with Mack having not been connected to a holdout like fellow ’14 draftees Aaron Donald or Odell Beckham Jr., it’s a situation to monitor.

One comment on “Raiders, Khalil Mack Not Close On Extension”