The Seahawks are set to meet with an acclaimed kicker, and Sebastian Janikowski may have a taker for what would be his age-40 season. 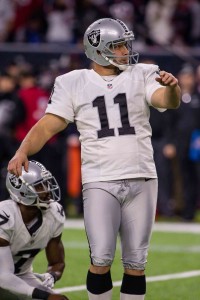 Janikowski will make a Tuesday trip to Seattle to visit the Seahawks, Adam Schefter of ESPN.com tweets.

This represents Janikowski’s second visit of the offseason. Both have been on the west coast, with the 40-year-old kicker meeting with Chargers brass last month. The Raiders opted against re-signing Janikowski, having pivoted to Giorgio Tavecchio. The Seahawks aren’t as stable at this position.

Jason Myers signed a reserve/futures contract with the Seahawks. Seattle experienced difficulties last season, with Blair Walsh‘s struggles continuing. Myers is now the incumbent, despite having not yet kicked for the Hawks in a game.

Janikowski was not a much-rumored player from 2000-2016, kicking for the Raiders for 17 straight seasons, but he accepted a pay cut last offseason and then suffered an injury that ended his bid for an 18th season as Oakland’s kicker. The Raiders did not pull Janikowski off IR, instead letting Tavecchio take his place, and he’s now looking for another opportunity.