Mark Ingram‘s been a key name in this week’s NFL news cycle. From being potentially on the trade block, to being suspended for four games and seeing his appeal denied, the eighth-year Saints running back has enjoyed an eventful few days. 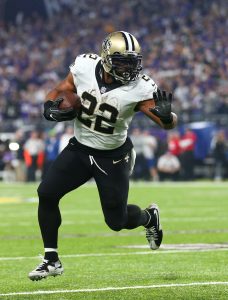 Now, Sean Payton is confirming the 28-year-old back will not be training with the Saints during the voluntary portion of their offseason. Ingram will skip OTAs and train on his own in Florida, a decision his head coach is questioning.

“He and I spoke, so it wasn’t a surprise to us that he’s not here,” Payton said, via Mike Triplett of ESPN.com. “I don’t agree with it. But it is optional, and that’s his choice.”

Triplett adds this does not appear to be related to Ingram’s suspension, which would not prohibit him working out with the Saints until the regular season begins.

Ingram is entering a contract year but will miss the first four games of it. The presence of Alvin Kamara, Ingram’s age and this suspension will make the prospect of an extension more difficult to envision this offseason. Ingram signed a four-year, $16MM deal in 2015.

Coming off the best two seasons of his career, each featuring 1,000-plus rushing yards, Ingram changed agents last month. And for the better part of the next month, he won’t be working out with Kamara and the other Saints running backs.