The NFL’s supplemental draft will be held on July 11, a league official tells Adam Schefter of ESPN.com (on Twitter). Unlike previous years, this year’s “second chance” draft features some quality talent and it’s almost assured that a player will be selected. 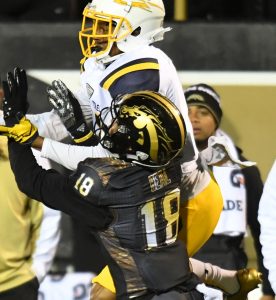 Former Western Michigan cornerback Sam Beal was already projected to be taken high in the 2019 NFL draft and it is believed that he will go somewhere in the first three rounds of next month’s supplemental draft. Beal, a 6’1″ corner, notched two interceptions and ten pass deflections last year as he put himself squarely on the NFL radar. His raw athleticism is a major draw for clubs – he started out as a wide receiver and only started playing cornerback in 2016. Despite his inexperience, he has flashed tremendous potential in the secondary.

In addition to Beal, there’s also Virginia Tech cornerback Adonis Alexander and Mississippi State safety Brandon Bryant for teams to consider. It seems likely that Beal will be the first player to come off of the board, but Alexander has been auditioned by just about every team in the NFL.

If a player is selected during any of the supplemental draft’s seven rounds, the team will have to sacrifice the equivalent pick for the following year’s rookie draft. There have only been 43 players selected in the supplemental draft since 1977, including two in the past six years (the Browns selected wideout Josh Gordon in 2012 while the Rams selected Isaiah Battle in 2015).