The Raiders have signed defensive tackle Ahtyba Rubin, according to an announcement from his agency. Rubin finished the 2017 season with the Falcons but will now look to suit up for the fifth team of his NFL career. 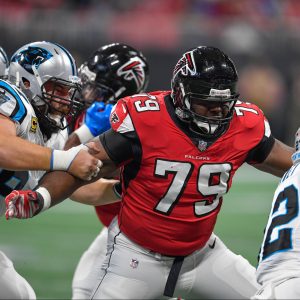 Rubin was set to enter the final year of a three-year, $12MM deal with the Seahawks in 2017. Instead, he was cut in early September. The Broncos signed him later on that month, but he was cut loose after dressing for two games. In October, he hooked on with the Falcons and went on to appear in ten games as a reserve.

In his first Seahawks season (2015), Rubin amassed 36 tackles, two sacks, and finished fourth among the team’s defensive linemen in snaps. In 2016, he once again had a perfect attendance record in the regular season as he racked up 39 tackles, one sack, and three forced fumbles. However, he wasn’t quite living up to the standards of his deal in Seattle. In his ten games for the Falcons last year, Rubin amassed 15 total tackles and zero sacks.

The Raiders will start Eddie Vanderdous and Justin Ellis in the middle of their four-man defensive line. Second-round choice P.J. Hall projects as the first defensive tackle off the bench, but Rubin could push Treyvon Hester, fifth-round pick Maurice Hurst, and the other DTs this summer.