Mike McGlinchey is expected to start at right tackle as a rookie, and the 49ers will have him in camp. 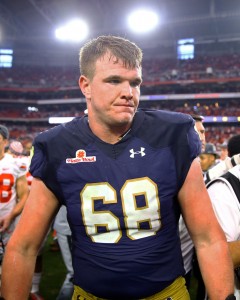 Offset language is believed to be holding up most of these deals, with CAA clients (which McGlinchey is) primarily residing as the stragglers, but the Notre Dame product will begin working with his fellow rookies (non-Pettis contingent, for now) this week. The 49ers traded Trent Brown to the Patriots, clearing the way for McGlinchey to move into the starting lineup opposite Joe Staley.

The 49ers begin camp Wednesday. McGlinchey started 13 games as the Fighting Irish’s right tackle in 2015 before shifting to the left side, where the 6-foot-7 blocker blossomed into one of the top prospects in this year’s class.