It sounds like Gaelin Elmore‘s NFL career will be ending before it even began. Charean Williams of ProFootballTalk.com reports that the Bengals placed the rookie defensive end on the reserve/retired list earlier today. Darren Wolfson of KSTP.com tweets that Elmore is planning on going into the ministry. 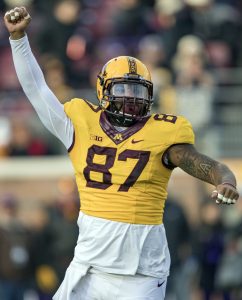 Placement on the list indicates that Elmore has chosen to retire instead of honoring his contract. The defensive end won’t count towards the Bengals’ roster or cap. However, the organization will hold the rights to the defensive end.

Elmore had three solid seasons with Minnesota, including a 2016 campaign where he compiled 16 tackles, four tackles for loss, 1.5 sacks, and three fumble recoveries. He transferred to East Carolina for the 2017 season and wasn’t nearly as productive, finishing the year with only 14 tackles. Despite the underwhelming campaign, the Bengals clearly had high hopes for the prospect. After going undrafted in this year’s draft, Elmore signed a three-year, $1.71MM deal with the team.

Following Elmore’s retirement, the Bengals are now relatively thin at defensive end. Behind starters Carlos Dunlap and Michael Johnson, the team is only rostering a pair of backups in Jordan Willis and Sam Hubbard.