As expected, the Steelers and Le’Veon Bell did not agree to an extension before Monday’s deadline. With that, Bell’s agent Adisa Bakari says the running back is not long for Pittsburgh. 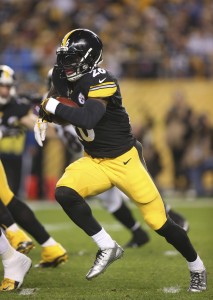 “His intention was to retire as a Steeler. But now that there’s no deal, the practical reality is, this now likely will Le’Veon’s last season as a Steeler,” Bakari said (Twitter link via ESPN.com’s Adam Schefter). “It became clear the Steelers wanted to pay the position, not the player.”

The latter part of Bakari’s quote pretty much sums it up. The Steelers have shown a willingness to make Bell the highest-paid running back in the NFL in terms of yearly average, but Bell has been pushing for a deal to compensate him as a world-class rusher who is also a high-end receiver. Meanwhile, he wanted a long-term deal to have more weight than the average NFL contract, which means high guarantees and heavy cash flow in the early years.

At last check, the Steelers were offering Bell roughly $13.3MM per season on a multi-year extension. Bell’s camp, meanwhile, asked for $17MM per year. The two sides were talking right up until the deadline, but the gap was too large to bridge.

In 2018, Bell’s $14.5MM salary will make him the top breadwinner at the running back position. However, the highest paid RB on a long-term deal is still Falcons star Devonta Freeman ($8.25MM/year). Cardinals running back David Johnson may top him with a new extension this summer, but he has less juice to work with after Bell did not reach an accord.

If Bell continues to play at a high level, he’ll be in line to revolutionize the running back market next year in free agency.