Now that Josh Gordon has appeared at Browns training camp, Dez Bryant is “no longer on the front burner” in Cleveland, according to Mary Kay Cabot of Cleveland.com, who adds the Browns and Bryant did not come close to reaching a contract agreement during the Bryant’s recent visit. While the Browns will keep tabs on Bryant, they’re not expected to sign him in the near future. 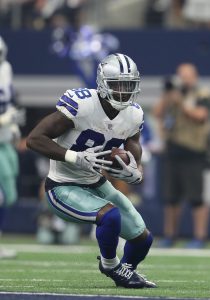 “No, I think one has nothing to do with the other in my opinion,” Jackson said. “Again, things will unfold as they will. The most important thing we know is that Josh is here, and again, we’ve had a good conversation with Dez and until he’s a Cleveland Brown, I can only worry about the guys that are on this football team.”

Bryant, 29, is reportedly looking for a one-year, “prove-it” deal and wants to play for a contending club. Whether the Browns will fulfill the latter requirement in 2018 is unclear, but Bryant could conceivably wait until a wide receiver injury elsewhere opens a roster spot.

While a number of teams have been tangentially linked to Bryant since he was released by the Cowboys, no clubs aside from the Ravens and Browns have been directly interested in the former first-round pick. In fact, Adam Schefter of ESPN.com has reported many teams are unwilling to consider Bryant even at the minimum salary.

Gordon, for his part, is currently not allowed to practice after the Browns placed him on the non-football injury list earlier today. However, Jackson did allow Gordon could be available for Cleveland’s regular season opener on September 9.

15 comments on “Browns, Dez Bryant Not Close On Contract”