DRC To Work Out For Seahawks, Raiders

Free agent cornerback Dominique Rodgers-Cromartie will work out for the Seahawks at some point over the next few days, a source tells Ian Rapoport of NFL.com (on Twitter). After that, he’ll audition for the Raiders. 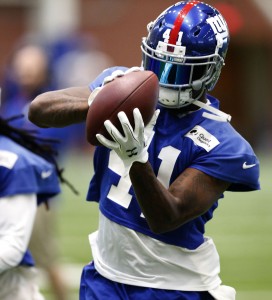 DRC was originally scheduled to workout for Seattle last week, but that had to be rescheduled due to a family matter. The Seahawks should be keenly interested in DRC since they could use a slot cornerback after waiving DeAndre Elliott. Behind projected starters Justin Coleman and Shaquill Griffin, the Seahawks are also rostering Dontae Johnson, Byron Maxwell, Tre Flowers, Neiko Thorpe, and Trovon Reed.

Rodgers-Cromartie’s age (32) was likely a factor in the Giants showing him the exit, but that is hardly a deterrent for Jon Gruden. And, even though the Raiders already have plenty of cornerback talent, they are apparently interested in seeing what DRC has to offer. The Raiders project to use Gareon Conley, Rashaan Melvin, and Daryl Worley as their top corners with support from the likes of Shareece Wright, Dexter McDonald, fourth-rounder Nick Nelson, and veteran Leon Hall.

It was an underwhelming 2017 campaign for Rodgers-Cromartie, who finished out as Football Focus’ 58th-ranked cornerback. He finished the season with 48 tackles, 0.5 sacks, and one pass defended in 15 games (five starts) for the Giants.