The Saints have acquired quarterback Teddy Bridgewater from the Jets, a source tells Ian Rapoport of NFL.com (on Twitter). The Jets will send Bridgewater and a sixth-round pick to the Saints for a third-round pick, sources tell Adam Schefter of ESPN.com (Twitter link). 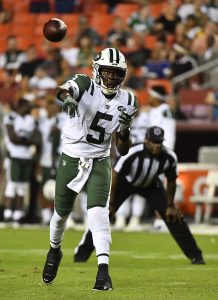 Bridgewater, who doesn’t turn 26 until November, joined the Jets in March on a one-year deal. Now, he’ll serve as the primary backup to Drew Brees in New Orleans. It’s not immediately clear what the trade means for Taysom Hill, who is under contract through 2019, or Tom Savage, who is on a one-year deal with the club. In all likelihood, Savage is on the verge of being released or traded.

For the Jets, the move signals a tremendous amount of confidence in rookie quarterback Sam Darnold. It’s likely that Darnold will be the team’s Week 1 starter, despite a tough early schedule, with veteran Josh McCown as his understudy.

Bridgewater may be a better quarterback than McCown in 2018, but McCown wouldn’t have fetched much in a trade due to his one-year, $10MM contract. The Jets also value McCown’s veteran leadership and mentorship to Darnold.

Jets players were notified of the trade on Wednesday afternoon when they were on the team bus, Tom Pelissero of NFL.com (Twitter link) hears. Just before they were about to depart, Bridgewater was informed of the trade and said goodbye to his teammates.

Bridgewater has impressed this offseason and shown no ill effects of the devastating injury that wiped out his 2016 campaign. In two years as the Vikings’ starter, Bridgewater completed 65% of his passes and averaged 3,075 yards, 14 touchdowns, and ten interceptions.

In three preseason games this year, Bridgewater has completed 28-of-38 throws (73.7%) for 316 yards with two touchdowns and one interception.